Blair is a female surfing student who is a tourist at Surfer's Paradise Ridgemount Resort. She had a relationship with Reef, but after an incident at the Big Wave Theatre, where a jealous Fin set her and Reef up on a date to see Break Point, the movie that Reef was taking lines from to use on her, she dumped him and then dumped cheese-covered nachos over his head.

Blair starts out as a happy girl who's easily fooled, but she can be very nasty and unforgiving. After dumping Reef, she later turns nasty when she threatens to have Fin, Lo and Emma fired from the hotel when she suspects that the dresses they are wearing are hers (which the girls avoid when they beat Blair back to the hotel and get the dresses back in her room's closet and get out of her room through the balcony just seconds before she arrives). 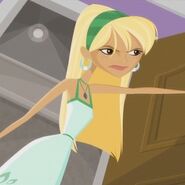 Add a photo to this gallery

Retrieved from "https://stoked.fandom.com/wiki/Blair?oldid=34726"
Community content is available under CC-BY-SA unless otherwise noted.