George Masterson Ridgemount is Lo and Ty's bratty younger brother. George is extremely cunning when it comes to torturing Lo. Throughout the show, George has shown that he will attempt any means to make Lo suffer.

In "Hang 9", when their parents are out of town, George threatens Lo to be nice to him while in the DR or he'll put a 2/10 on her evaluation, which would give her a strike. In retaliation, Lo tells his crush at a nearby table that George likes her and that he's 12. The crush reveals that Grommet told her George was 14, since the girl appears to be 15 (according to Lo). Again, Lo embarrasses George in front of the girl when he makes Lo bring him some food out to the pool area. Lo says that the food gives George the runs, grossing the girl and her friend into leaving. For revenge, he and Grommet come up with a plan to trick Lo into cleaning a horrible room after they mess it up badly with seafood in the rug and even seaweed in the bath tub. They then forge his dad's handwriting, saying Lo needs to clean up the room to get back in the penthouse. Lo does this, thinking it was her last job working at the resort. When Rosie sees a tired Lo in the room she ask where the boys were, since she was the one who let the boys clean up the room at their request. George calls Lo and ask her about the mess. Now knowing that it was all a trick, Lo tries to throw garbage onto George, but fails.

When George buys Reef's totem in "Reef And That Evil Totem", Reef has to try to get it back since it is still cursing him. George refuses, even after Reef offers triple the five bucks George paid for the totem. After not giving it, Reef and Broseph roll George up in a towel and carry him to the Office. Reef then gives him the option of handing over the totem, or going with it over the waterfall, after which George gives it up willingly. After throwing it over the waterfall, George is carried back to the hotel, since if Broseph and Reef made him walk he would see the Office, a place he doesn't know about since he hasn't been through the initiation.

In "All We Are Saying is Give Reef a Chance", George's dad is trying to teach him to play golf, but George is uninterested and says he would rather play golf via a video game. He shows his father that he even created an avatar for Mr. Ridgemount on the video game. His father says that golf is a game of character and tells George to "get in there and putt like a man." After a failed attempt to golf and being yelled at by his father, George starts crying and runs away, claiming he hates golf and he hates his father. Later in the episode, George is angry that Lo gets a brand new luxury convertible and Mr. Ridgemount agrees to give George anything he wants in return for his love. George says that he wants an African Pygmy Hedgehog named Rick and Mr. Ridgemount orders Baumer to get a hedgehog for George. Baumer only gets him a regular hedgehog, to which George says, "I said I wanted an African Pygmy Hedgehog," but loves the animal anyways. He even goes to the extent of throwing Rick a party with Reef as the pinata. 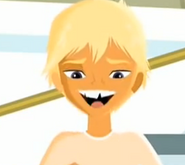 Add a photo to this gallery
Retrieved from "https://stoked.fandom.com/wiki/George_Ridgemount?oldid=34234"
Community content is available under CC-BY-SA unless otherwise noted.