Kelly is one of the senior staff at Surfer's Paradise and is one of the primary antagonists on Stoked. She's the general manager/hostess/head of the wait-staff of the Pirate Ship, and is the direct supervisor of Emma and Lo Ridgemount (until Lo gets transferred to the hotel's housekeeping department in Endless Bummer). Unlike most of the other characters on the show, Kelly's established as being a non-surfer—in fact, according to Ty in Heartbreak Hotel, Kelly apparently hates surfing.

She first appeared in "Welcome to Paradise, Dudes!", when she was telling Johnny that the toilet at the staff house overflowed. She is a snob who, in "Board and Confused," led the other seniors in torturing the groms. She also came up with a last-minute challenge where failing the challenge will lead to instant disqualification, hoping to fail the groms. When the groms passed initiation thanks to Lo, she was the only one to not be impressed. She has also shown to not like Lo very much and considers her to be spoiled and rich, as well as getting enjoyment out of humiliating both Lo and Emma.

In "Penthouse of Horror", Kelly carelessly has the Kahuna's favorite fish, Fluffy, turned into a fishstick. At first she doesn't care, until Fluffy comes back to life and attacks her while she tallies the restaurant receipts at the Pirate Ship after hours. She has to wear a bandage around her neck for the rest of the episode and tells the Kahuna of what happened. When they realize that Fluffy is heading towards the beach for Emma, Kelly shows concern, but points out that she can't lose any more waitresses.

Kelly is still dating Ty while Emma is still falling for him in "Sick Day". When Emma gets an opportunity to help Ty with the trash, a jealous Kelly resents it and sets out to interfere. In "Channel Surfers", when Kelly walks into the fridge, she saw Reef and Lo making out, then she rolled her eyes and backs up. Then In "Grumpy Old Brahs", she saw Chester Grizzle and Reef in the restaurant. She said Mr. Grizzle can have the seniors' discount "because he's older than dirt." then told Reef he has to pay full price. After Reef said he wants his seniors' discount, Kelly calls him a loser and told him that he's 16. Reef then tells Kelly, "You just lost yourself a heck of a tip, missy." When she appears in "My Fair Leslie", Fin asked her if she can take Kelly's shift, she didn't answer with words, but with action (running off so fast she leaves her pirate captain outfit behind), essentially saying yes to Fin's request. In "Browatch", she threatens to rat out Reef, Fin, Lo and Johnny to Bummer about scamming Caroline, a difficult guest at the hotel (a plan hatched by Reef and Johnny in response to Bummer short-changing the staff with their pay), until Lo bargains with Kelly over giving her a share of their money. When Kelly negotiates for 50% of the cut, she and Lo reach a deal. When she tries to scam Johnny about protecting her 75%, Johnny reminds her they agreed to 50% until Kelly again threatens to get Bummer, then Johnny is forced to agree with her. When Reef complains about Kelly ripping them off by increasing her claim of the profits, Kelly counters by telling Reef that he's "ripping off a guest at the hotel". After Caroline skips out on paying and Johnny tells her that they don't have the money, Kelly calls for Bummer. In retaliation, Johnny tries to give her his shoes that Caroline's dog pooped on.

In "Heartbreak Hotel", Lo has a plan to sabotage her and Ty as a couple, which succeeds when Kelly breaks up with him. Then Lo gets the poster of her brother, Ty, to get to the ladies but they all reject him. Then Ty dated Jemma (Emma in disguise). Then Kelly tells Ty that Lo is responsible for this. When Jemma is revealed to be Emma, Kelly insults her again and Ty responds by telling Kelly to "take a hike". Kelly takes offence to Ty telling her off and claims she's "dumping" him and storms off. Ty then takes Emma out on a date.

When not working at the Pirate Ship, Kelly usually wears a sleeveless red top with black spaghetti shoulder straps, khaki-colored cargo shorts, a necklace with three blue crystal stones and a choker necklace. She has dark red hair styled in a long bob cut and a light tan. 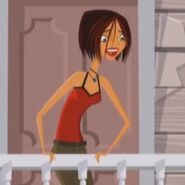 "Can you call maintenance?" 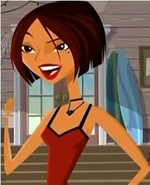 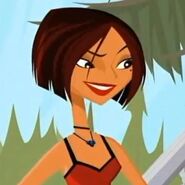 Kelly deals with the groms at the initiation. 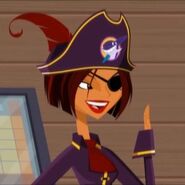 Kelly at work in her pirate costume. 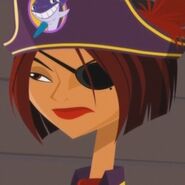 Not looking at all impressed with Lo's work ethic. 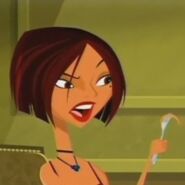 Kelly's not enjoying her blind date with Bummer... 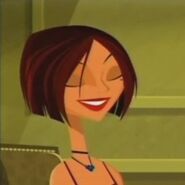 ...but she enjoys making Bummer pay for her dinner. 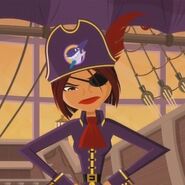 Kelly dings Emma with a strike (through no fault of Emma's). 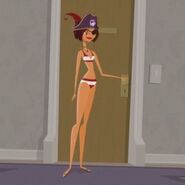 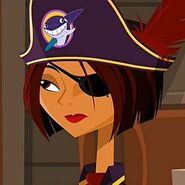 Directing a dry look at Emma. 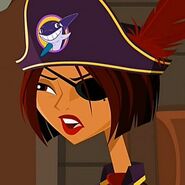 "Save the sass for the customers."

Kelly comes under attack by seagulls...

Rolling her eyes when Reef and Lo make up an excuse about why they're in the locker.

"Maybe if you were nicer, small children wouldn't cry when they see you!" —Emma.

Add a photo to this gallery
Retrieved from "https://stoked.fandom.com/wiki/Kelly?oldid=34978"
Community content is available under CC-BY-SA unless otherwise noted.