"Is that my yummy couture track suit?"

-Conversation between Lo and Mrs. R in her debut.

Mrs. Ridgemount is the mother of Ty, Lo and George. She is currently married to Mr. Ridgemount, the owner of Surfer's Paradise Ridgemount Resort.

When Lo throws a wild party, Mrs. Ridgemount doesn't make a big deal out of it like her husband does (although she does take the time to warn Lo that her dad was rather angry about it). She is always trying to be a cool mom and tries to help her kids. She tries to give Lo a chance to prove she is responsible by having Lo book an event, but Lo screws it up.

Mrs. Ridgemount loves to shop, but prefers to go with her daughter who clearly knows more about fashion than she does. She also hates to act middle class in case the women at the yacht club find out, as revealed in "Reef, Broseph, and Emma's Totally Stupid Adventure".

Kicking back with a smoothie while talking to Lo.

She'll stand by her daughter in times of need.

Mrs. Ridgemount enters the penthouse as a pig goes by.

Asking if anyone's up for room service.

Trying to warn Lo about her father's mood. 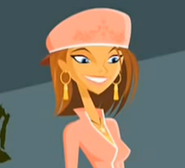 Add a photo to this gallery
Retrieved from "https://stoked.fandom.com/wiki/Mrs._Ridgemount?oldid=34041"
Community content is available under CC-BY-SA unless otherwise noted.